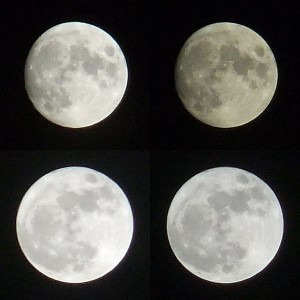 Putting on my astronomer hat, as one whose main research focus involves measuring the distance between the Earth and Moon, I feel compelled to “speak out” about the “supermoon” hype that crops up periodically.

Last night’s full moon was touted to be a “supermoon”—larger than normal.  As a result, many folks made it a point to watch the Moon rise.  I love the fact that people are paying attention to the Moon, getting outside, and enjoying the serene experience of watching the Moon creep over the horizon.  What I don’t like is that the hype leads to an overall sense of disappointment in many.  Is the campaign a net positive, or a net negative?  I don’t know.

In this post, we’ll look at the numbers and see just how special the supermoon is.

Last night, I was at a party and went out to see if the Moon was up yet and if the sky was still clear—just because I like to stay tuned in to such things.  I was delighted to see that the Moon was just creeping over the next hill over, about 200 meters away.  I went inside to alert others at the party about the fantastic moonrise in progress, only then to find out that this was a “supermoon.” I found that there was an overall sense of disappointment among the viewers that the moonrise—while cool in and of itself—did not seem especially cool or amazing relative to other moonrises.  I got home to find a message from another disappointed friend, registering a complaint about not “feeling the joy.”

And they are right to complain.  The Moon gets close to Earth once a month.  Sometimes, this happens to coincide with the full moon. The Moon is in an eccentric (elliptical) orbit that produces a monthly variation of about ±5.5% of its range.  On top of this are solar perturbations adding (or subtracting) another 1% or so.  The net effect is that the Earth-Moon range varies from 356,500 km to 406,700 km all the time (the time-average distance is 385,000 km).  So the closest full moons are about 8% closer than the average.

Maybe a perceptive individual—well-calibrated to the apparent angular size of the rising full moon—could tell that a full moon near perigee (close to earth) is bigger than normal.  I’m not sure that I could, even though I tend to pay attention to these things.  Complicating the perception are psychological effects that make us think that the moon on the horizon is large, compared to how it looks high in the sky (the actual truth is that it’s about 1.6% smaller on the horizon due to the fact that the rotating Earth moves us closer to the Moon as it appears to rise in the sky).

As hard as it is to perceive the large (8%) effect, how special are the supermoon events, anyway?

Well, if we look at the period from 2010 to 2015, we see the Moon going about its usual dance (blue line), making many cycles between near and far (perigee and apogee).  I have placed red dashes on the graph to indicate the day surrounding full moon.  Sometimes these happen to be near the perigee, sometimes near apogee, sometimes just nowhere special. 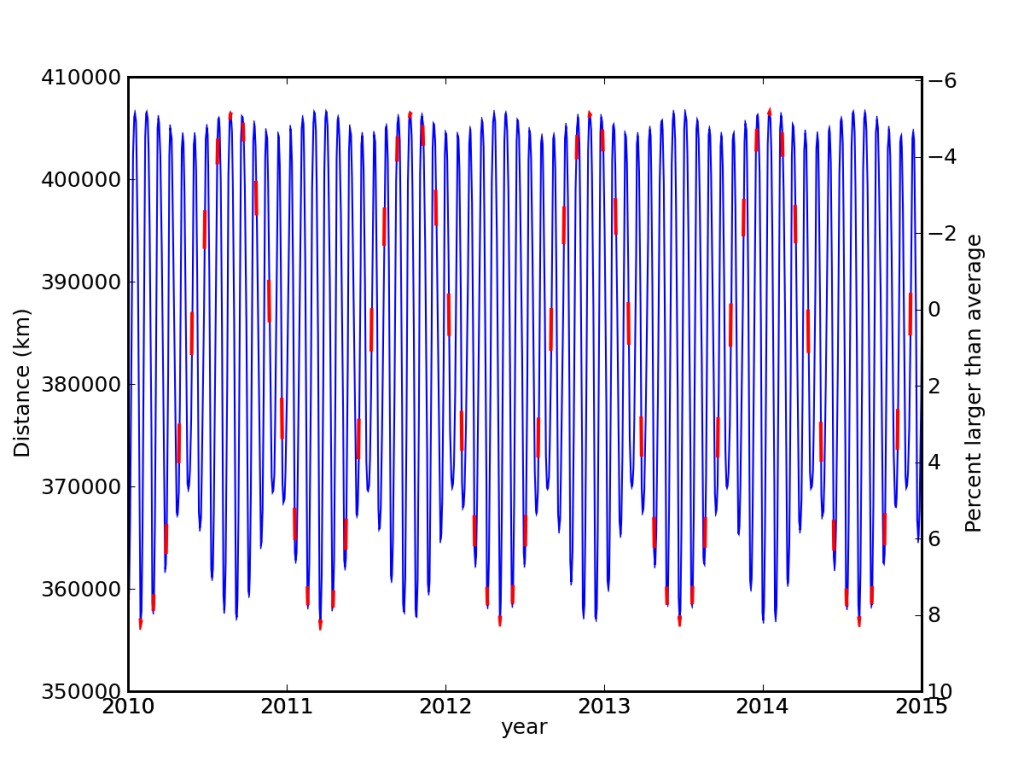 You can see the “special” full moon episodes as the little red marks near the bottom of the plot.  They happen about every 412 days (the beat period between the perigee-to-perigee period of 27.5545 days and the full-to-full period of 29.5306 days).  So they happen almost every year.  But look at the adjacent months: these are within 0.5% as good.  Even the well-calibrated observer could never be expected to distinguish this month’s full moon size from last month’s or next month’s.  Move along, folks.  Nothing to see here.

Okay, so there is something slightly special about the 2012 and 2013 supermoons just in how well-aligned they are relative to the extreme perigee: note the symmetry in the heights of the red marks on the left and right flanks.  Over the long haul, these get out of whack a bit, before coming back in.  But this is a very subtle point.

Does the full moon ever coincide with the lesser perigees?  Are we in a special period in which the full moon happens to find the closest of the perigees?  Well, no.  The solar perturbation that causes the modulation of perigee distance is itself tied to the lunar phase.  So full moon will always be near the bottom of the envelope.

The full pattern is 18.6 years, and is shown below.  You can see that when full moon happens near perigee, it’s always associated with the most extreme perigee events.  Sometimes the two adjacent months are equally “super”—which makes for an ever-so-slightly diminished effect (back to what makes 2012/2013 slightly better than other years). This effect is most evident around 2003, about halfway back in the 18.6 year cycle. 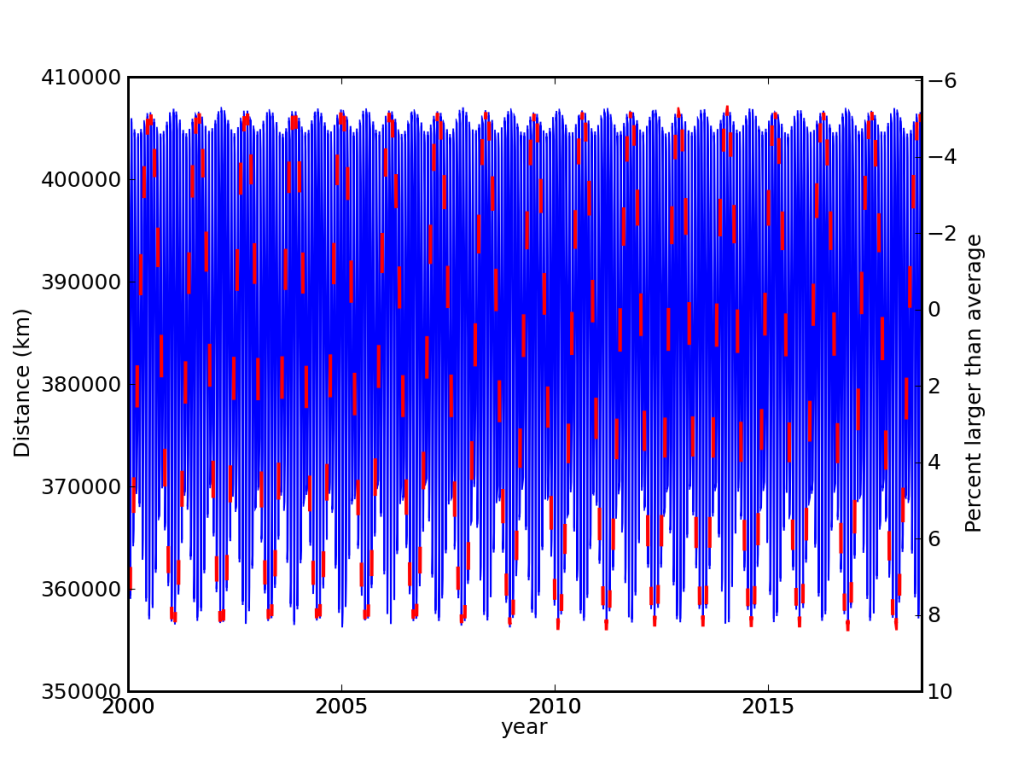 Nothing terribly unusual going on here.  Just the Moon in its usual dance, getting closer and farther every month—sometimes happening to be at full phase when at perigee.  From year to year, the closest full moon doesn’t vary by more than a few tenths of a percent.  Guess that’s enough for some headlines.  But do they put the “specialness” in quantitative perspective?  And diminish the spectacle, impacting sales?  Why would they ever…?

So my advice is: enjoy a moonrise whenever you get the chance.  There’s plenty to appreciate about the experience without the hype.  I can only hope that the hype has not had a net-negative effect in turning people off from enjoying the natural sky.