[An updated treatment of some of this material appears in Chapter 8 of the Energy and Human Ambitions on a Finite Planet (free) textbook.] 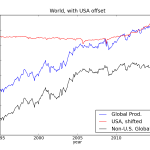 I’ve been maintaining “radio silence” for a while—mostly on account of an overflowing plate and several new new hats I wear. All the while, I have received a steady stream of e-mail thanking me for Do the Math, asking if I’m still alive, and if so: what do I make of the changing oil situation? Do I still think peak oil is a thing?

I was wrong about everything. Oil is not a finite resource: never was and never will be. We will employ new technologies and innovate our way into essentially perpetual fossil energy. We’ve only scratched the surface in exploration: there are giant deposits (countless new Saudi-Arabia-scale fields) yet to be discovered). The shale oil tells us so—and it won’t stop there. Shale first, then slate, marble, granite: just squeeze the frack out of rocks and we’ll get oil. Meanwhile, whole new continents are being discovered, rich with resources. The most recent was hiding behind Australia. And naturally it doesn’t stop there. We have now discovered thousands of planets just a hop away, most of which are likely to contain fossil fuels of their own. So game over for the resource limits crowd, yeah?

Oh wait. I was wrong about everything in the preceding paragraph.

Let’s not get confused, people. Earth is finite (and other planets are mostly in hostile environments and in any case rendered immaterial by unfathomable remoteness). The resources are finite. One-time consumables will peak in their use one way or another: they must do so—either by depletion or by voluntary reduction in use. Estimating timescales is the tricky part. But do I still believe in peak oil? As surely as I believe we landed on the Moon.

What about timescales: do I believe we are likely to see peak oil in the next decade or so? I do still think this is likely: a point of view based on more than stubbornness.

A good first step in anticipating the future is to understand the present and recent past. Why the dramatic price drop? In two words: shale oil. No big surprise. This is the story. The geopolitics add complexity to the tale, but essentially—as I understand it—OPEC is trying to run shale oil operations in the U.S. out of business.

Shale oil is more expensive to produce than conventional oil. Technology has its price, after all. The Saudis and friends have pledged to hold oil prices low for a good while in an attempt to destroy the market viability for U.S. shale companies to continue operation. I can’t say if this will work (the key question: how many years does it take to starve a company into liquidation of assets?). But that’s the not-so-secret word on the street.

So we need to understand something about the shale oil boom. Firstly: is it really responsible for the apparent glut? Secondly, can we expect it to last?

The U.S. Energy Information Agency maintains global data on oil production. Plotting the data for the world appears as follows. 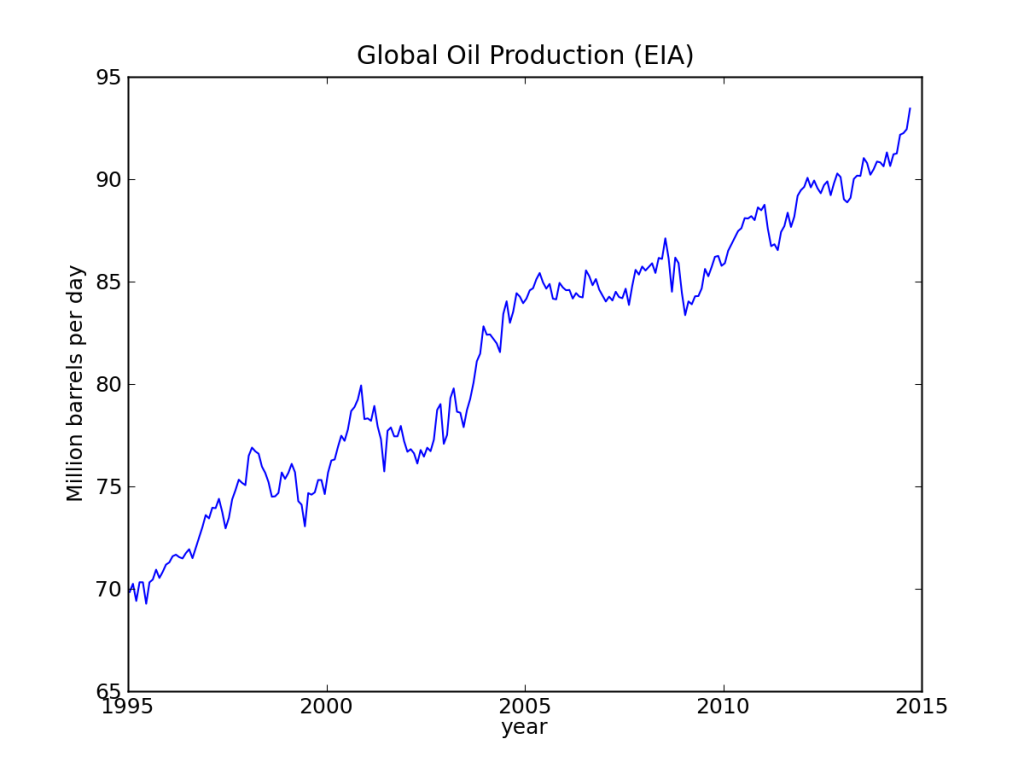 At a glance, we see an inexorable climb in oil production. No evidence for a peak here. If we cover up the right-hand side, beyond 2009, we can justify a different narrative: production hit a plateau from 2005 to 2009. During this time, oil price crept gradually from $45/barrel toward $100/barrel and then spiked in 2008 at $140/barrel. This factor-of-two price hike had no effect on production, which strongly suggested a tapped-out world: pegged production.

One can make a compelling argument that the slow price increase strained businesses in many sectors (tourism, auto manufacturers, airplane industry, etc.), and that the resulting lackluster growth popped the housing bubble—itself built on the fantasy of perpetual strong growth. When the 2008 recession hit full force, demand dropped and took the price plunging with it. Yet global production didn’t flag that much: again reinforcing the story that oil is a highly inelastic economic commodity—on account of there being no ready substitutes.

But then the plateau disappeared into the ensuing continuation of growth, making a once striking feature now difficult to discern.

Let’s flip to the U.S. production to see what influence shale oil has had. 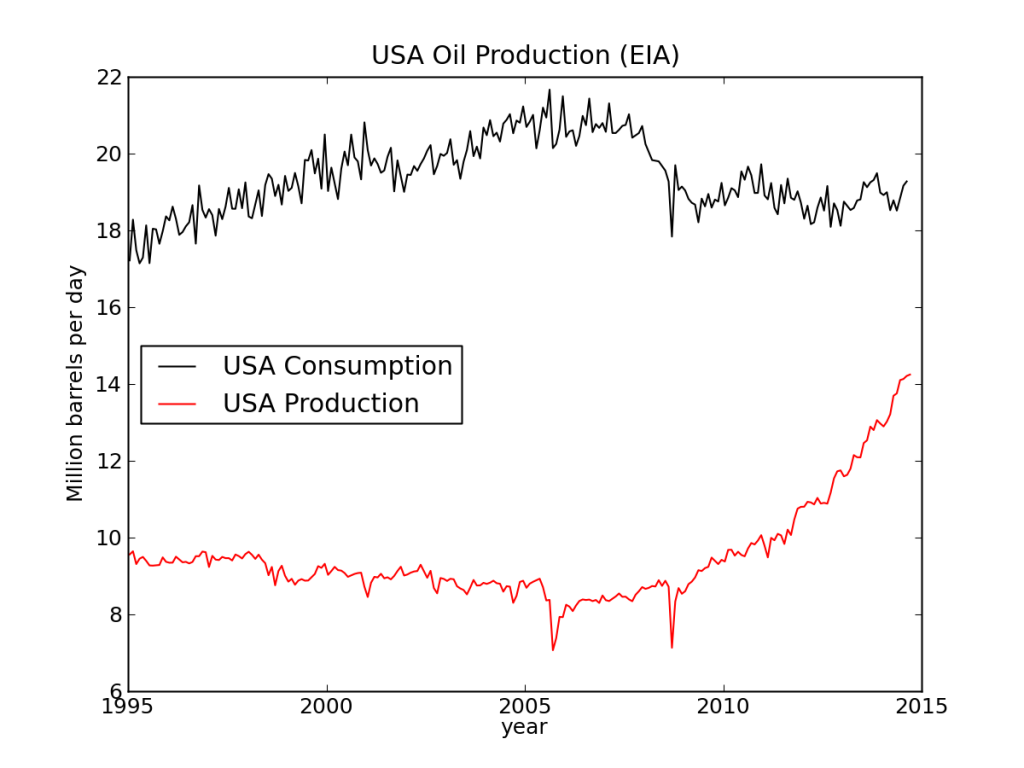 As the century odometer rolled over, we found ourselves in a slow year-by-year production decline, tucking below 9 million barrels per day (the scale of consumption in the U.S. is about 20 million bpd). Then came shale oil and what can I say: it’s a phenomenon. Around the time shale oil cranked up, consumption (black curve) was in a recession-induced decline, leading to heady predictions of energy independence in a few years’ time. Consumption has since leveled off, and we might even expect an uptick as a reaction to lower gasoline prices. Bring back the SUV! May it as that be, the red curve is climbing, and talk of energy independence for the U.S. is not to be dismissed out of hand.

That is—until OPEC has its say. The shale oil story proceeds on two fronts: the physical front and the artificial front. Physically, shale oil remains a finite resource, as any other. I have seen mixed messages about the longevity of these “plays,” probably the balance indicating that the premium spots have been exploited most rapidly, that individual drilling sites peak and collapse on few-year timescales, and that the rapid rise we have seen may represent more of a sprint than a marathon. So I would not be surprised if the juggernaut loses steam on the back of its own success, on a decade timescale. But then we have the artificial factors (highly nonlinear human meddling) that may force a downturn in shale production by economic means. Another “artificial” influence may assert itself on the environmental front, based on flammable drinking water and the like.

In any case, I am hesitant to embrace shale oil as the “new normal,” to be increasingly exploited throughout my lifetime. Certainly you can’t convince me that any of our finite resources will be with us for the long haul, but even on the timescale of 10–20 years, I think it’s unwise to extrapolate on the basis of the new kid in town (a transient, or even drifter!).

One final thing worth investigating: how much of the recent “post-plateau” growth in global oil production can be attributed to shale oil in the U.S.? 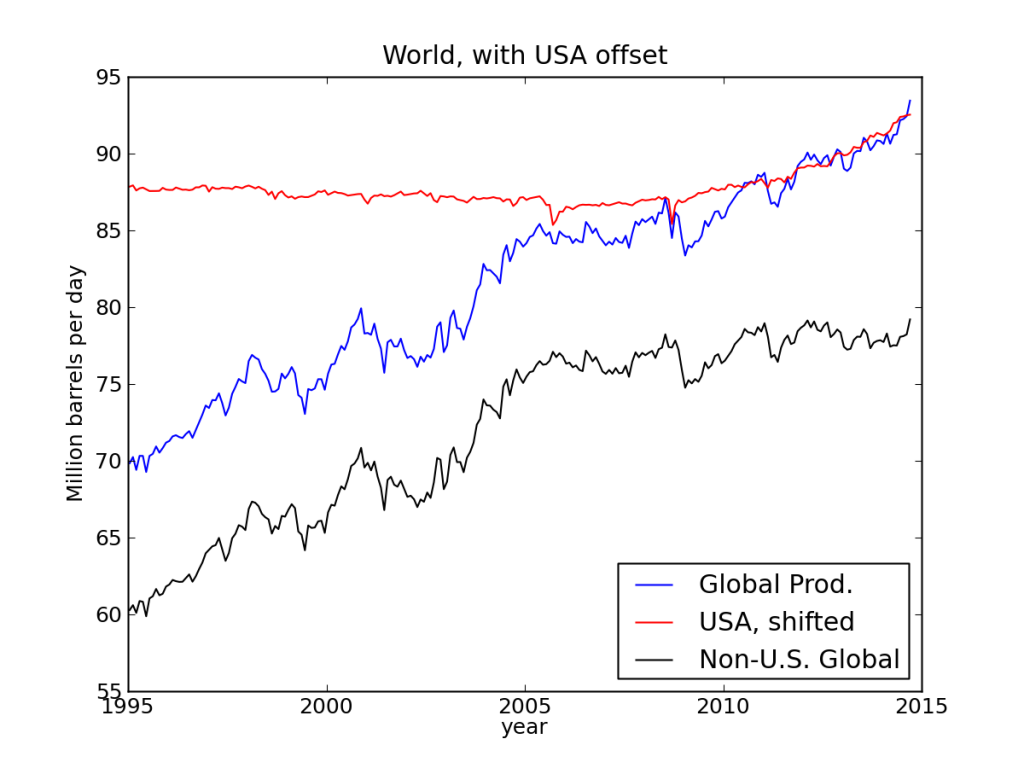 In the graph above, I have superimposed the U.S. production atop global production by adding an offset to the U.S. number so that the last few years overlap. Now the diminishing gap between the red and blue lines represents growth in the rest of the world. U.S. shale oil accounts for about 70% of the total growth since 2005. It is rather striking to behold. Global production had the characteristics of a freight train for the first ten years of this plot. Then in about 2005 it stopped abruptly (hello, plateau). The non-U.S. global production (black curve) has experienced only 20% as much growth from 2005–2015 as it did in the preceding ten-year stretch. That’s a substantial bend. Peel off the shale oil and we see that the global plateau is still very much with us—despite sustained high prices through the period.

For comparison, Saudi Arabia produced typically 9–10 million barrels per day in the 1995–2005 period, and is now edging toward 12 million bpd. While this is a commendable increase (not easy), it is not at the same scale as the U.S. increase, which now puts the U.S. back in the role of largest oil producer in the world—as it was for decades in the mid-20th Century (not a small factor in the famous prosperity of the U.S.).

So it’s fair to say that the continued upward trend in global production post-2005 is due to the shale oil phenomenon.

What does this do to my thinking? Time. It’s added a decade or maybe two to the timescale for global peak oil. And time can be a great thing. With it, one may smartly prepare for a post-carbon world. We need time and the luxury of surplus energy to fashion a world less dependent on fossil fuels (the solution to the Energy Trap).

Some of this will happen as a matter of course. Electric cars are in a whole different place than they were ten years ago. I expect continued progress on this front—although falling short of a transformative revolution, I suspect.

But cutting against us is the sense that we have averted a crisis, so we can go back to business as usual. Investment and research into alternative energies will wane: just when we need them more than ever. Indeed, I myself do not feel the same degree of urgency that I did a few years ago, and have allowed the normal set of “distractions” to creep back in. In part, it’s just a reflection of where society at large is right now. It’s harder to draw an audience to discuss energy/resource scarcity when the headlines are in the opposite direction.

This leads to another issue on human psychology that I have been wanting to post for some time. Look for this next, when I get another break from my hat collection.