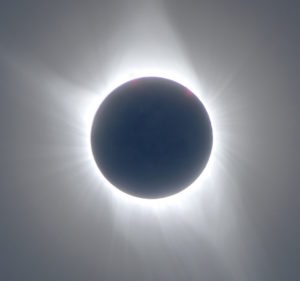 In the event that anyone still checks this site for new posts (not sure whether to be proud or concerned), here’s an update. But mostly it’s a pointer to some photos I think some may enjoy.

While I remain concerned about the collision course between growth and resources, I have found ample distraction these past few years: research, teaching, administrative duties, bike commuting, and starting a company to make aircraft detectors. Oh, and politics. What a spectacle!

Speaking of spectacles, ever since traveling to Mexico in 1991 to see my first total solar eclipse, I’ve wanted another one. Just afterwards, a consultation of upcoming events suggested that the next one I was likely to see would have me waiting until 2017! As a 21-year-old, I wondered if I would even still be alive in that distant year, inconceivably old. I made it. And what was I thinking—old?!

So after much anticipation and preparation, I traveled north with a college friend, remote-camping/mobile and ready to pounce on the best weather prospects. We ended up in far eastern Oregon, on BLM (our) land. The experience was amazing: I automated my cameras so that I could largely just gawk. It was all too short: I needed a pause button to really take it all in. I’ll have to settle for future eclipses. And to that, I say Mexico (not the U.S.) in 2024—based on likely weather. Besides, it’s unclear whether the eclipse shadow will be able to get past the wall we keep hearing so much yakking about.

But you can see highlights of my photos from the recent glorious event here.

In other news, my Nickel-Iron batteries seem to be holding up well (I owe a post on some real analysis of these). I am “living the dream” in my daily commute. After 12 years off a bike (obvious routes are dangerous; hilly profile would require time-inefficient shower), I finally solved the problems: (longer) trail route and an e-bike (off-grid-solar-charged). Purists would say I’m cheating, but I say I’m back on a bike and working plenty hard. The rough-hewn route exposes me to wildlife (the occasional coyote or bobcat, even), has a few stream crossings, and enriches my life by offering a daily connection to the natural world. My propulsion energy is now free of direct contributions from fossil fuels, which I find to be rewarding—even if the materials/manufacture are still utterly dependent.

So that’s it for now. I haven’t given up on Do the Math, but have not had much new to say, and little available time in any case. I hope all is well with you all.