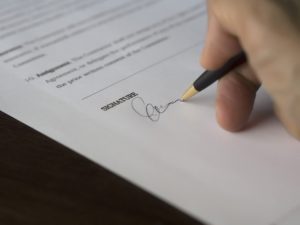 Image by Edar from Pixabay

Evolution is like a lengthy job application process. Each new species endures a long and harsh vetting procedure to judge what role it plays in the ecosystem, how prepared it is to deal with lean years, predators, disease, climate variations, and anything that might reasonably be expected to arise even once in a thousand generations. Those species not able to satisfy the impartial judges of nature are voted off the island. It’s a tough crowd.

The successful species—the ones that have held on for many thousands of generations—essentially have signed a contract with nature. The contract is implicitly a “common law” arrangement: if you’ve stayed with us this long, you’re (indifferently) accepted as part of the family.

The terms of the contract are also implicit: as long as you continue to operate within the parameters by which you were judged to be adequate members of the ecosystem, you enjoy the built-in protection of that same ecosystem to continue survival, having carved out a role integrated into the rest by a complex web of interdependencies.

Humans signed our contract with evolution based on a primitive lifestyle that persisted for hundreds of thousands of years. We also inherited clauses from ancestor species, whose capabilities we incrementally altered, thus extending the vetting span to millions of years.

Humans today stand in gross violation of our pact with nature. We are egregiously in breach of contract. Our protections are thereby revoked.

For the roughly 10,000 year climate-stable period of the Holocene, humans cleverly struck out on a new path—starting with agriculture and cities, then exploding into a technological existence fueled by the discovery of ancient solar energy stored in fossil form.

Individual humans have lifetimes too short to easily comprehend the implications of their actions in the broader sweep of evolutionary history. A natural conclusion to many who even bother to ponder such questions is that humans have transcended natural law and escaped evolution’s grip, able to conjure resources beyond the wildest dreams of primitive humans. Thus, many would likely accept but shrug off the claim that we are in breach of contract, assuming that we are clever enough to avoid the penalties, late fees, and termination.

But be careful, here. We have a strong, myopic “now” bias, and we should at least acknowledge that our present mode is so novel that its long-term survival is utterly untested. Just because electricity to your home is not shut off immediately after deciding to stop paying the bill does not mean that an indefinite loophole has been found. After a few months of enjoying “free” electricity in this seemingly “new normal” mode, you’ll be in the dark.

A point of fallacy comes from a failure to recognize that most of the resources we use today to effect this artificial reality are part of a one-time inheritance that we are blowing through in a few short centuries. So all bets are off that we can continue executing today’s bag of tricks very far into the future. The burden of proof would seem to lie with those who support the extraordinary (and evidence-free) belief that we can carry on for centuries and millennia in our current nature-detached mode.

Meanwhile, physics is very clear: the growth that has been characteristic of the last several centuries is absolutely a short-lived phenomenon—a temporary phase and not a new normal.

So the up-close and familiar conditions of today do not form a good basis for judgment of long-term prospects. Our brains are addled by the sugar-high of this special time—this dazzling fireworks show. To appreciate the longer view, we need to recognize this fact and pull back to a bigger perspective. Reluctance to do so is dangerous and, frankly, a bit bratty.

The Web of Life

The terms of our contract with nature are rooted in ecosystem services and roles. The intricate web of living organisms forms a type of interconnected and interdependent life-support system. Not only have we substantially removed ourselves from this web, we are picking at and destroying it as we go.

The thinking, if one can call it that, seems to be that we no longer need the arcane natural world, so can profit from its gradual destruction. If short term money can be made, and legal protections either do not interfere or are ineffective, the resource is extracted, developed or burned without a second thought—often irreversibly.

Once we realize that our flight from the web was momentary—unsustainable over the long haul—we will be dismayed to learn that our dismantling of it comes back to hurt us. It’s a long fall without the web’s support.

In effect, our recent detachment from natural flows and our evolutionarily-vetted niche means we waive protections: nature is no longer “obligated” to have our backs. As if that were not risky enough, we foolishly hack away at the safety net, almost sealing our fate as losers in the end.

Come on, people. That’s not smart. Or maybe I should say that’s not wise. The word smart, to me, is starting to be an insult. Smart means capable of attaining power and seeding destruction. Wise means refraining from such things when it cuts against long-term interests.

We’re plenty smart as a species: too smart. That’s kind-of our core problem: too smart to guarantee our own success in partnership with nature. From an evolutionary perspective, increased intelligence confers an advantage, until it does not any more. Do we win the prize for being the first species to cross the line into maladaptive intelligence territory? When is the ceremony?

How do we return to the good graces of our contract? A simple, yet unsatisfying answer would have us revert to a primitive state. That fate could await us, willing or not. The classic story Earth Abides, a mid-century fiction—painfully hokey in spots—paints a persuasive picture of human reaction to collapse of civilization: some of the immediate survivors are keen to recapture the old ways and conveniences, but those born into the new world see little value and are more intent on enjoying and thriving in the world as they find it. The adaptability of humans means our species is likely to survive in some form, and those individuals will largely accept the world in whatever state, without regret.

Being part of the “old” set, conditioned to this world, the thing I value most and would hate to see lost is our scientific (and other forms of) knowledge. I sympathized with the main character in Earth Abides, Ish, in his esteem for the campus library—containing something approximating the sum of human understanding. We worked hard, and transcended human shortcomings to arrive at some fundamental truths and understandings that are bigger than us. It hurts to imagine losing this legacy, which I have always assumed was a “permanent” contribution by humanity. Could posterity really not be a thing? Would academics be upset to learn this?

So one answer, on one extreme, is to abandon technology and live more as part of the wild world. We obviously won’t (and can’t) flip a switch and do this, being unprepared in terms of requisite skills, psychological disposition, and even physical condition.

More hopefully, we could appreciate that our endpoint needs to dovetail back into nature, and establish a glide path by which we could do so smoothly and deliberately, in such a way as to preserve hard-won knowledge of the way the world works and assure the survival of critical technologies to at least preserve knowledge, if not expand upon it.

I don’t know if this is possible. Continued growth—the ways of the last few centuries—is manifestly impossible. A high level of resource use characteristic of today is impossible to maintain in present form over the very long term. A high-tech world may therefore be impossible for nature to support more than temporarily: fundamentally incompatible. A mostly natural world keeping a veneer of technology may be possible. And a primitive existence is certainly, demonstrably possible.

If we aim too high, we risk faltering and losing precious knowledge in a chaotic collapse. If we aim too low, we also necessarily give up what we have learned. So it seems to me that the prudent, most conservative course is to think about ways to maintain the bare minimum of modern technology and knowledge without overtaxing the natural world in a truly sustainable fashion. If we can achieve—or even define—that minimum and show it to be long-term viable, then we can imagine building up additional layers while prioritizing sustainability as an unconditional paramount requirement (and do so globally, for uncounted generations; sound tough?).

It’s a radical thought, I know: utterly unfamiliar, and unpalatable to many. Well, I find catastrophic failure and collapse to be pretty darned unpalatable. Since we can at least define modes at either end of the spectrum that are manifestly impossible and possible, and we are today operating in the manifestly impossible (growth) mode, my impulse is to hew closer to the certainly-possible route. But this forces me to consider what really matters and what I would be most loath to sacrifice, which is why I hope we can preserve knowledge across the transition. I just don’t know how to see it through.

P.S. Appendix section D.6 of the new textbook offers additional thoughts on the evolutionary role of intelligence and how this might impact the human story.

11 thoughts on “In Breach of Contract”