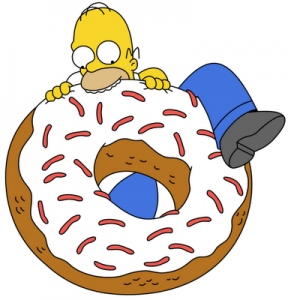 The holiday season is upon us, and for many, this translates into a marked uptick in the consumption of tasty food treats. I’m no different, and can really pack it in on such occasions. For instance, the day after Thanksgiving this year, I stepped on the scale to find myself about 5 pounds (~2 kg) above normal weight. I kicked in my diet plan, and by Monday morning (3 days later) I was back to normal. Resume course. I use a simple formula, backed by physics, that works every single time. The topic is Do-the-Math-relevant for two reasons: it applies quantitative physics to everyday life, and it touches on attitudes relevant to energy/resource conservation.

I’ll spare the suspense and reveal the physics trick (unlike magicians, physicists are all too eager to explain the how and why of nature’s tricks). In this case, your body mass adheres to a simple bookkeeping of mass–in vs. mass–out. Mass comes in by ingesting food and water. Mass goes out by many mechanisms: some obvious, some not. Skipping over the obvious unmentionable forms—often ascribed a numerical sequence of #1 and #2—we also have #3, #4, #5, …

A surprising fraction of our weight loss occurs right under our noses—literally. The air we exhale is loaded with carbon dioxide and water that were not present in the intake. Yes, we do grab oxygen out of the air, but these atoms are returned to the air attached to carbon and hydrogen. Our skin also perspires, which is another mechanism for mass loss. So really we’re emitting a constant stream of carbon and hydrogen from our bodies. Brick by brick, these atoms add up to significant mass.

The chemistry is straightforward. Taking a unit block of carbohydrates (like sugars: CH2O), reacting with oxygen (O2) produces CO2 and H2O. Conceivably, all of the carbohydrate mass we ingest could be exhaled by combining it with oxygen. The same applies to lipids, which are comparatively oxygen-free—comprised primarily of carbon and hydrogen. But this is why we also get more energy per gram from fats: because there are more oxygen reductions to reap. By having more on-board oxygen, carbohydrates are already half-reacted.

The math is pretty simple. If we eat a mixture of carbohydrates, proteins, and fats averaging, say, 5 kcal per gram, and have a diet of 2000 kcal/day, this amounts to 400 g (about a pound) of food mass each day (ignoring the non-nutritional and water components of the food). And in steady state, this means we lose a similar amount per day largely by continuing to breathe, perspire, and occasionally “using the facilities.”

Another angle on the whole breathing thing: according to Wikipedia, the air we inhale is 21% oxygen, by volume, along with trace amounts of CO2, H2O, etc. Meanwhile, we exhale CO2 at 4–5% concentration, reducing oxygen to 14–16%.

If I assume that each breath is one liter in volume, and that we execute 10 breaths per minute, I calculate an exhalation of 720 L of CO2 per day, which translates to 32 moles at standard temperature and pressure (22.4 L/mol), thus equaling 380 g of carbon atoms at 12 grams per mole. Hey—that’s nearly identical to what we get from the 2000 kcal/day diet calculation!

Water vapor is also an interesting parameter. Saturated air at body temperature contains about 40 g of water per cubic meter. So in the extreme limit of breathing in dry air and exhaling 100% saturated (humid) air at body temperature, our 10 L/min rate would translate to 14 cubic meters per day and 560 g of water each day. This puts water loss via breathing at a level comprable to that of carbon loss.

Two factors reduce the effective mass loss from exhaling water, however. One is that the air we breathe isn’t necessarily bone dry. Air at normal room temperature and 50% humidity contains about 10 g/m³ of H2O—reducing the effect by 25%. But more significant is the question of where the exhaled water originated. If it’s ingested water, count the mass loss at full freight. If it is reacted water from inhaled oxygen, only the part from hydrogen (2 mass units out of 18, or 11%) of the exhaled mass came from ingestion—the rest borrowed from the air as oxygen.

Now understanding that the body will continuously shed mass even if the food supply is shut off, we’re ready to examine my dirt-simple, but extremely effective diet plan. The idea is to cut back on the amount of mass that goes in, and let the numbers take care of the rest to balance the books and put me back on target. How do I limit mass in: skip meals.

That’s it? Yes. Stupid, isn’t it. But the math is equally simplistic. As long as you don’t compensate by eating bigger meals when you do eat, it’ll work itself out. I’m not talking about fasting or total deprivation: just miss a breakfast here, a lunch there. Granted, different people may experience different physiological reactions to ingesting less, but even the stingiest physiology can’t beat the mass balance concept. Just keep breathing! The more you breathe (exercise, for instance) the more mass you’ll shed.

A colleague of mine once asked how I manage to stay trim, puzzling over my freedom to eat “fattening” desserts and the like. I told him that I skip meals when I see my weight creeping up. “Oh, I couldn’t do that,” he said. I probed, “Why? What would happen if you did?” He looked at me with a curiously shocked expression and said, as to an idiot, “I’d get hungry!” Is that all? That’s hardly a barrier.

Okay, let me inject some quantitative context in which to view our eating habits. A human, deprived of food but allowed water, may typically live about two weeks before running out of fuel. I don’t recommend experimentation on this front. But all the same, one may miss some 40–50 meals (at three per day) before going broke. If you think of your body’s store of energy as gasoline in your tank, each meal represents about 2% of the total supply. Think about this: our daily routine has us pulling into the gas station with our “refuel light” on when our tank reaches 98% full. We’re essentially always topped off.

It wasn’t always this way in the history of the human animal, and many in the world today do not have the luxury of three square meals daily. The human body evolved to tolerate dry spells. In this context, the hunger we sense when our tank dips to 98% is our body’s way of expressing a preference that we eat.

Alright, it would not be at all healthy to operate our bodies like cars, pulling in to the feeding station once every couple of weeks on fumes. So while the 98% metric provides some startling context, it’s unfair. All the same, we should recognize that the world won’t end if we miss a meal or two.

This brings us to the real challenge of diet: psychology. How one responds to the physiological signal of hunger is vitally important. Hunger is an interesting experience. It comes on strong: the stomach protesting with audible growls. I can only assume that for many people, these alarms displace thoughts of almost anything else but feeding the hunger.

I personally respond to these pangs with detached amusement. I think of hunger as a primitive, low-level part of our constitution—akin to our brains that have a reptilian complex underneath a mammalian complex underneath a cerebral cortex. We’re built from simple pieces tracing back to our evolutionary roots. The lower levels control many of our primal instincts, but the final layer of intellect can override the base functions. Much as a chicken going berzerk when the wind blows a backyard umbrella over (true story), or a cat scrambling out of the room at the innocent sound of crinkling plastic (also true), or a child throwing a conniption when peas touch carrots on their plate, I see hunger as overreacting to a non-threatening situation. “Calm down,” I say with a wink.

Ignoring the hunger, I focus on other items of greater interest. Hunger will periodically reassert itself and demand attention, but it becomes a barely-noticed distraction that can be tuned out. Similarly, a barking dog next door may be annoying, but need not consume all your mental attention. I find that after an initial wave lasting an hour or two, the hunger gives up and stops being so annoying. I wonder how many people in our well-fed society know that hunger will not simply continue to build, if left alone? It comes in waves. I can wake up less hungry than when I went to sleep the night before.

So ignoring hunger is really not that hard. I think it’s a matter of shifting priorities and emphasis, especially in relation to the internal vs. external world. We all have an internal world pertaining to our individual bodies. And we live in an external world that shares an objective reality. A rumble in my stomach has effectively zero impact on the external world, if I decide to ignore it. Because I value the external more than the internal (the shared rather than the “me”), I prioritize the impact I have there. In my rank-ordering, I consider science the most important, fundamental thing, followed by the physical universe that science describes, then the Earth and its ecosystem, then humans, and then me. Perhaps this is an oddly inverted hierarchy.

And here is where the psychology of dieting ties into many other Do the Math themes. My success at vastly trimming down my energy footprint in this world can be tied to an attitude that my personal comfort/enjoyment is comparatively unimportant. I prioritize the “us” over the “me.” I’m just one individual, and my very existence—let alone the fullness of my belly—is hardly important in the grand scheme. But I can have a big positive influence by being less selfish about grabbing goodies just because I am able.

As highlighted in previous posts, my wife and I basically don’t heat or cool our house, tolerating 55°F (13°C) in winter and (occasionally) 85°F (29°C) in summer. We line-dry clothes, limit gratuitous lighting, limit discretionary travel, avoid energy-intense foods (like meat), don’t have kids, etc. These are sacrifices of a sort, and often invite ridicule by those (threatened individuals) who find such practices repellent. I expect similar reactions to my diet technique. But just like I know that huge energy savings may be realized by exercising choice, I know that weight gain is very easily controlled by what you put into your mouth (and how often). The math, physics, and chemistry are on my side. The barrier is in the will. My question is: do we have the constitution to exercise the requisite will to trim down our energy appetite as well as our physiological analog? Show me. Please.

43 thoughts on “A Physics-Based Diet Plan”