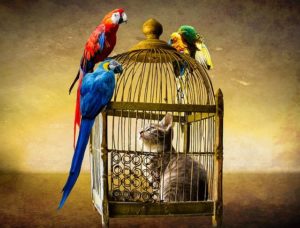 Flip the script! Image by Gerhard G. from Pixabay

Purveyors of unpopular messages are often scrutinized for any inconsistent, seemingly hypocritical behavior that might give lie to their preachings and be used to discredit the unwelcome perspective. A famous example is Al Gore’s heavy air travel schedule to spread the word and take action against climate change, resulting in an enormous CO2 footprint. If we all behaved that way, the very problem at hand would be substantially exacerbated.

Such accusations either knowingly or pathetically miss the obvious point that the net effect of Al Gore’s efforts may be positive owing to the simple idea of a lever: a little expenditure here can counteract vast expenditures elsewhere for an overall gain on the problem. For many, the glaring superficial contradiction is enough ammunition to discredit the entire enterprise.

But identifying possible hypocrisy in those who warn of future perils, as I have done, has a dark edge: if even those cognizant individuals cannot get away from behaviors they know to be damaging, doesn’t that only amplify the severity of the warning?

This is the part where I confess various behaviors that would seem to be inconsistent with my writings. It is true that my energy and resource footprints are far below the U.S. average—in electricity, methane, gasoline, food, and consumerism. I re-evaluated my footprint in comparison to average Americans in Chapter 20 of my textbook, confirming a factor-of-several reduction in most categories.

So I can perhaps justify some sense of credibility in putting my money where my mouth is. Or more accurately, I refrain from putting money places in accordance to what comes out of my mouth (and fingers). It can be hard to separate ecological responsibility from just being a cheapskate.

But I am far from perfect, and frequently experience pangs of guilt as I knowingly choose a less virtuous path. For instance, Section 20.3.4 of the book details the energy impact of dietary choices. Quantitatively, I should be vegan, and even grow most of my own food. But because I have not given up dairy and eggs, I am at best “only” a vegetarian. And quantitatively, chicken is not really different from dairy, so I find myself increasingly allowing it to creep back into my diet, on the basis that it’s energetically indistinguishable from cheese. But I could choose to react the other way and give up both chicken and cheese. Also, I reserve “meat treats” (usually some form of poultry) for special occasions, which often involve shared experiences with others. So my “public” eating habits make me look like an even bigger hypocrite for someone claiming to be mostly vegetarian (flexitarian, really).

I often point out the unsustainability of any form of growth. Institutions like Social Security are predicated on growth: not only economic gain via interest accumulation, but population growth leading to an ever-increasing workforce supporting a comparatively small retirement pool, so that a retiree can extract more money than they themselves put in. As developed nations experience stagnation or decline in population, the scheme fails and promises are broken. So if I were truly principled, and believed what I say, wouldn’t I forego any Social Security payments? Well, in fact, I intend to retire early and start drawing at age 62, assuming the institution survives long enough (which I deem to be likely: we will fight tooth and nail to preserve it as long as possible).

In performing the analysis of my energy/resource footprint (Chapter 20), the most personally disappointing sector is air travel. Yet I found myself visiting my mother and sister in May 2021 after vaccinations permitted post-pandemic travel again. As giant as the energy cost is, nullifying much of my progress elsewhere for the whole year, other pressures/factors prevailed.

Apparent Hypocrisy May Not Expose a Lie

This is not an exhaustive list of personal failings, but helps illustrate the range of domains in which I knowingly transgress principles that are indeed important to me.

But with this comes some insight. I know how important all this stuff is. I feel it. I lament the collapse we may bring on ourselves. I anguish over the choices we make as a society that I believe will lead to failure and suffering on an unprecedented scale. I can get emotional (“shirty,” my wife calls it) when discussing these issues because the pain is real. Therefore, I know with complete certainty that my efforts to communicate the risks we run are not for show, about getting attention, lining my pockets, or any other base impulse.

On these grounds, I suspect that those who accuse crusaders of hypocrisy are often wrong in their interpretation. It may be projection—an embarrassing insight into the drivers of their own petty souls. Or it may be disingenuous: an effective smear campaign deliberately engineered to discredit the effort and put people off the trail (a la “merchants of doubt”). Or it could simply be poor judgement and lack of an accurate understanding of the issues or motivations. In most cases, it serves as a convenient foil to a message they are predisposed to reject for reasons unrelated to the apparent hypocrisy itself.

One possible dynamic is that the suggestion of a difficult future—having reduced access to material comfort—is simultaneously deemed to be undesirable and triggers guilt over personal indulgences. When the communicator of such hardships is seen not to fully embrace the lifestyle they warn is coming, the reaction may be: “Aha! How can you possibly expect all of us to give up X when you are not willing to do so yourself?”

If this is indeed a common reaction, it exposes a deep flaw in comprehension of the human role in the natural world. It operates on the conceit that it’s all a matter of choice, of attitudes, of desire. The individual warning of dire challenges does not want those hardships to come to pass—which is the whole point of the warning. Perhaps the core message has not been internalized: humans operate within physical limits and should be careful not to extrapolate the boom-time fossil fuel years under low population and ecosystem pressures into a “full” world of resource limitations. A rejection of that foundational concept or disconnect at that level will lead to all manner of problems in interpretation.

But my main purpose in writing about this topic is that I believe seemingly hypocritical behavior can also point to the grave nature of the problem, only adding to its credibility.

Using myself as an experiment, I can witness the discordant juxtaposition: excruciating awareness of failure modes lurking ahead; and behaviors that are not wholly consistent with that awareness. I have the privilege of knowing that I’m not secretly a fraud. Making this blog freely available (no revenue or advertising) and my textbook available for free (and printed at-cost) should help to dispel accusations of being motivated by personal financial gain.

To me, awareness of my own inconsistent behaviors only serves to highlight my anxiety. I know that giving up things that I could easily afford is sometimes hard. If someone as motivated (freaked out) as I am can’t bring myself to do all I can, then what chance do we have a society to make really tough decisions and accept sacrifices? How will a democracy elect to make those choices?

Granted, one of the hardships is standing too far from the pack. I do not operate in a vacuum, but am embedded in a society that has its own set of (temporary) foundations. If meat was rare and special throughout society; if we did not have Social Security; and if air travel was not cheap and convenient, then I would presumably have less trouble eliminating or curtailing even more my utilization of these things—just by virtue of vastly reduced access.

But next time someone deploys the hypocrisy weapon, think about flipping the script: perhaps it exposes just how hard it is to change and only reinforces the weight of the alleged hypocrite’s message. Then, somewhat counterintuitively, apparent hypocrisy can become a form of credibility that only strengthens the position, when not actually exposing fraudulent motivations.

33 thoughts on “Credibility from Apparent Hypocrisy”