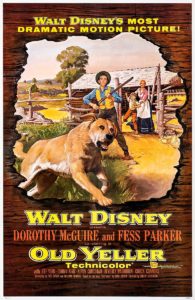 Poster for the 1957 film Old Yeller

Growth has been our close companion for centuries, and we love it to pieces. It makes politicians swoon, economists dance, investors giggle, and community planners smile.

The only problem is that this friend is about to turn into our greatest enemy.  Pursuit of growth—in money and resource exploitation—has a flip side on Earth’s ecosystems.  Up until now, we mostly saw the good side of growth: conveniences, technology, health care, security.  Becoming apparent is the toll this misguided focus is taking on our irreplaceable home.  No amount of money (all the king’s horses and all the king’s men) can restore lost species and destroyed ecosystems.  So maybe money is a bad metric for what really matters, yeah?

I have struggled to come up with a good analogy for growth that will help us process what it means.  The best I have come up with (and only recently) is that growth is like Old Yeller.  If you’re not familiar with the 1957 film, it’s a real tear jerker.  I remember bawling in concert with my sister when the amazing dog—dearly loved by the family for getting them out of many a pickle—contracted rabies, became aggressive toward the family, and had to be shot.  That’s right: a kid’s movie ended with the beloved central character being shot dead.  Those were different times.  What you really wanted in a kid’s movie was for your children to emerge wrecked. (I also saw Jaws at age 6 and have been scarred since.)

Growth has likewise been this fantastic friend: all upside, upside, upside.  But the rabid side is beginning to show, and our ultimate success depends on killing it.  There will be tears.  Many will bargain, unable to accept the necessity of ending growth.  But it’s no use.  The physics is clear.

Please use the comment forum to suggest other (better) analogies.  Not straying too far, it may be like raising a lion: awfully adorable as a cub, but ultimately a mortal threat to have in the house.  It’s possible that better analogies can be conjured.

P.S. I wrote this in 24 minutes, so please excuse the shortness and sloppiness.

21 thoughts on “Growth Is Our Old Yeller”