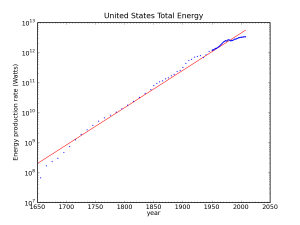 This is a quick update regarding the first plot shown in the galactic scale energy post. A reader, Chris, called attention to the obvious departure from exponential growth in recent decades. The post required turning a blind eye to many practical issues (like population saturation) in order to entertain indefinite growth, serving to highlight the absurdity of the notion. But Chris goaded me into paying more attention to the departure from the exponential track in the actual data, and here are the results of a logistic approach.

A logistic function looks like an exponential in its early stages, but goes through a linear inflection and ultimately levels out to a constant value. Sometimes called sigmoids (for their S-shapes), or population curves, logistic curves show up frequently in scenarios where initially exponential growth is capped by limited resources.

The red exponential function in the original plot (exponentials are straight lines in plots where the vertical axis is logarithmic) fits the U.S. energy growth curve relatively well for centuries, before peeling off starting around 1980. Let’s apply a logistic curve and see what happens.

But first, there are two ways to apply a logistic curve in this scenario. We will call the exponential trajectory the “infinite growth” scenario. A logistic curve that ultimately flattens out to mean that we’re producing a constant energy output each year might be called the “sustainable” scenario, because we would have to use renewable inputs (transitioning away from finite resources) to carry this out. On the other hand, to the extent that our meteoric energy trajectory is a mere reflection of a finite resource like fossil fuels, then the logistic function would apply to the total energy extracted, and it is the cumulative energy used that flattens out. In this case, the slope of the logistic curve is the rate at which we produce energy each year. If we did not adapt to renewable inputs, our trajectory would roll over and decline to (essentially) zero in the future. We can call this the “finite resource” scenario. 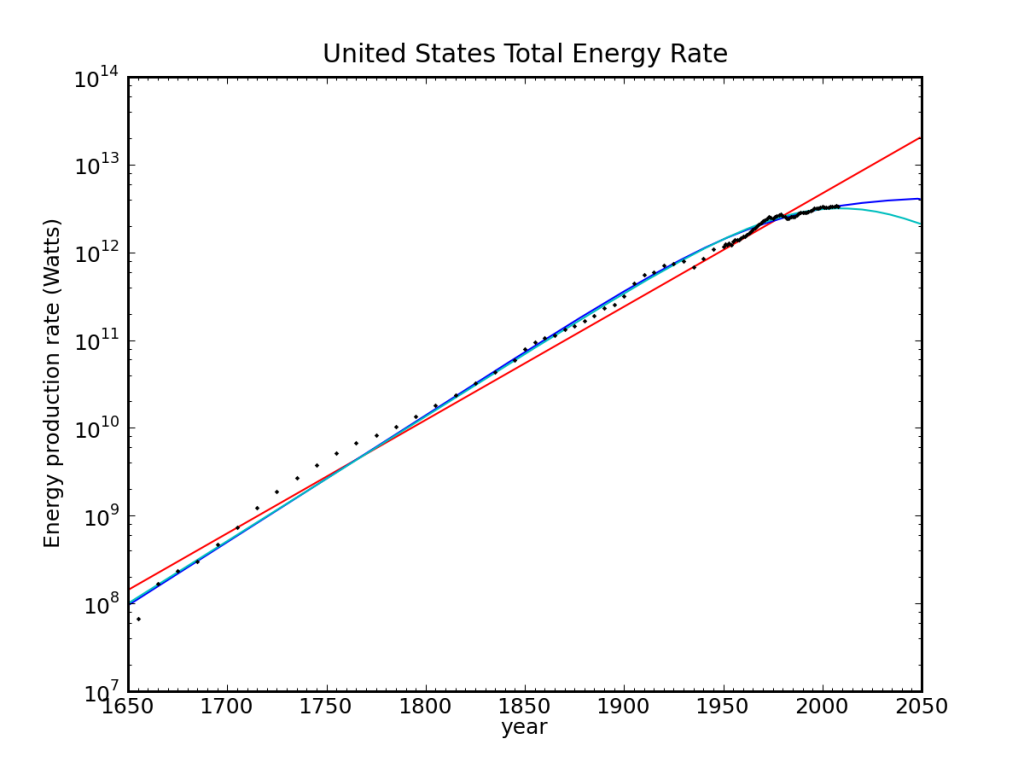 In this semi-logarithmic plot, the black points are the U.S. data, as posted previously (with references). The red curve is the exponential fit, corresponding to 3% growth per year. The blue curve is the “sustainable” trajectory, and the cyan curve is the “finite resources” fit. These are not fit by eye, but by an objective least-squares parameter estimation. The “sustainable” curve levels out at 4.4 TW (we are at 3 TW today), and has an inflection (halfway point) in 1973. The “finite resource” fit peaks in 2009 just above 3.1 TW. Both logistic curves do a far better job fitting the data in recent times than does the exponential. But isn’t it remarkable that we cannot readily distinguish the sustainable from the power-down scenario based on the current data? This is a severe warning for those who wish to extrapolate the past into the future. The math is happy with either, at this point.

But let’s look at the problem in more familiar, linear space. The fit in log-space is dominated by the distant past, while all the interesting stuff is happening recently. 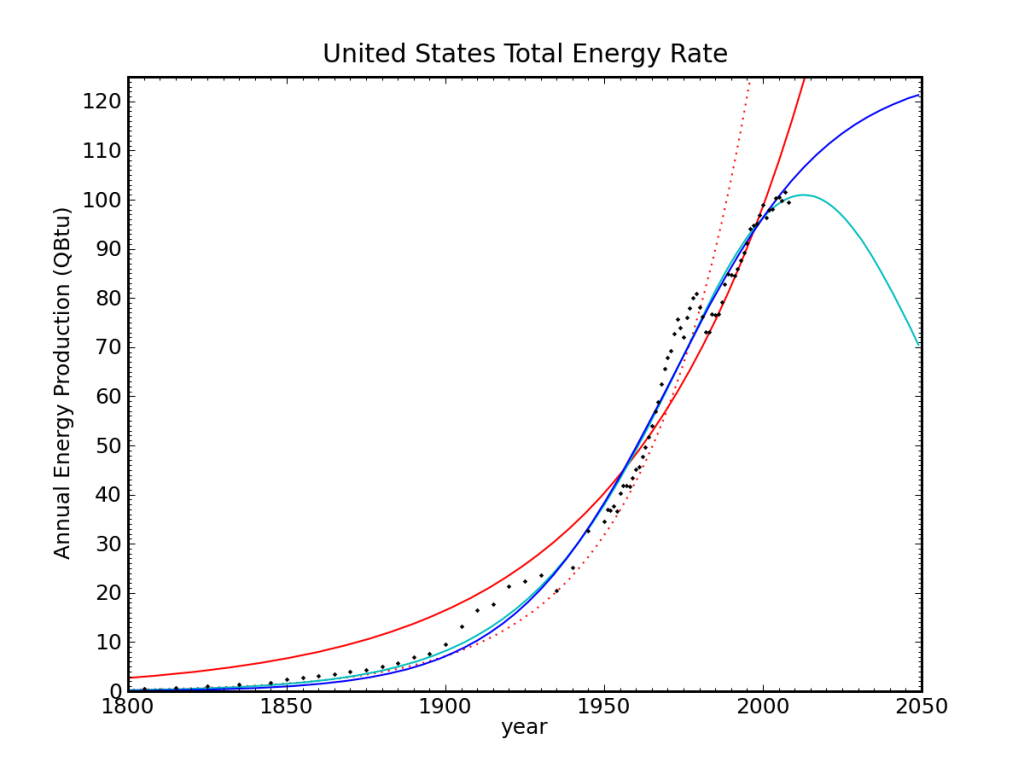 I conducted the same fitting procedure in linear space, as shown here. The red exponential curve scales back to 1.8% per year growth from 3.0%, and as such is muted at the top end—but poorly fits most of the data. The red dotted line is the fit from the logarithmic graph, which does a better job of fitting until about 1980. In this case, the blue sustainable trajectory has its half-way point (inflection) in 1971, and will top out at 127 QBtu per year (equivalent to 4.2 TW). The cyan finite resource curve peaks in 2013 at 101 QBtu/yr (3.4 TW). So the story is very similar to that of the log-space plot/fit.

Either logistic scenario is a radical departure from the indefinite growth scenario. As pointed out in the post on economic growth, even level energy—together with limits to efficiency improvement—spells trouble for continued economic growth. The finite resource scenario is downright disastrous.

I have already pointed out the serious fallacy of extrapolating the future based on some mathematical curve. So don’t mistake the message here: I’m not predicting the future, or favoring one curve over the other (except to point out that the straight-up exponential is the worst of the three by a fair margin). The reality is probably not well described by any of these curves. Physics and practical accomplishment, rather than imagination or a mathematical model, will decide the future. I for one am humbled by the fact that vastly different logistical scenarios do equally well at fitting the data to date. But I also recognize that we have based progress to date on a rapidly diminishing finite resource. Unless we deliberately plan for a renewable—and ideally sustainable—trajectory, acting decades ahead of the crunch, we won’t be happy with the result.

22 thoughts on “Does the Logistic Shoe Fit?”