On Do the Math, three previous posts have focused on transportation efficiency of gasoline cars, electric cars, and on the practicalities of solar-powered cars. What about personal-powered transport—namely, walking and biking? After stuffing myself over Thanksgiving, I am curious to know how potent human fuel can be. How many miles per gallon do we get as our own engines of transportation?

Okay, the “miles” part is straightforward. And we can handle the “per.” But what’s up with the gallon? A gallon of what? Here we have all kinds of options, as humans are flex-fuel machines. But food energy is not much different from fossil fuel energy in terms of energy density.

Nutrition labels in the U.S. use kilocalories (or Calories with a capital “C”) as an energy measure. One kilocalorie (kcal) is 4.18 kJ of energy. Carbohydrates and protein come in at 4 kcal/gram, while fat registers 9 kcal/g. For comparison, coal ranges from 4–7 kcal/g, gasoline is 10 kcal/g, and natural gas is 13 kcal/g. So fat is pretty much like gasoline.

On one extreme, we could use a gallon of lard for our fuel. Though not a delight to eat, at close to 2000 kcal/$, lard is probably the best value in the grocery store in terms of energy per dollar (just a guess). This is truly the closest thing we could get to eating a gallon of gasoline proper. But we’ll tone it down and explore more standard fare.

Besides the energetic components, water and fiber also contribute to mass/volume of our food. On a recent trip to New Mexico for my experiment, I did a food experiment for blog’s-sake: for several days, I ate exclusively packaged foods with good labeling. Excluding drinks, the food averaged 1.85 kcal/g. If we then assume that the food has a density similar to that of water, we get 7000 kcal/gal (1 gal is almost 4 liters, which itself is 4 kg). By comparison, a gallon of gasoline contains 36.6 kWh, or 31,000 kcal—about 4.5 times more potent than our typical food mix (but beware the aftertaste).

Couldn’t we do better by eating a bucket of lard? Energetically, yes. But would you really feel like walking or biking afterward? Or would you rather lie on the floor moaning in discomfort? I will default to packing our gallon of food with the “standard” fare of burritos, lasagna, etc. to make for a realistic calculation, but we’ll occasionally multiply our result by a factor of 4.5 to get the gas/lard equivalent.

For the bike, the approach is pretty similar to that for the car, in that the dominant effect is aerodynamic resistance. For the car case, we learned that the energy required to go a distance D at velocity v is ½cDρADv², where A is the frontal area presented to the wind, ρ = 1.3 kg/m³ is the density of air at sea level, and cD is the coefficient of drag (about 0.8 for a cyclist). If we take the area to be 0.5 m² (approximately a half-meter wide by a meter tall in biking posture), we find that it takes about 13 Newtons of force to push against the wind, turning into 13 kJ to travel 1 km (1000 meters) at 7 m/s (15 m.p.h.).  Interestingly, the effective “drag area,” cDA ≈ 0.4 m² for a bicycle can be beat by an entire four-seat car having, for example, a frontal area around 2 m² and cD ≈ 0.2.

As an aside, a generic shape not designed with aerodynamics in mind—let’s call it a man-bear-pig—will have a drag coefficient around 0.8–1.4. A trout, on the other hand, has a drag coefficient around 0.1. What we really need is a trout on a bicycle! Then we’d really be smokin’. We can turn the famous feminist slogan that “a woman needs a man like a fish needs a bicycle” on its head with the observation that a bicycle really screams out to have a fish ride it!

Once you’ve recovered from that perversion, we should add rolling resistance, using a coefficient of 0.004 times the 800 N weight (based on 80 kg mass, or 180 lb for rider plus bike). This presents an additional 3 Newtons of force to overcome. Work is force times distance, so over 1000 m this turns into 3 kJ for a total of 16 kJ to go one kilometer on the bike.

A mile is 1.6 times as far, so that we require 25 kJ = 6 kcal of delivered energy to bike a mile. This is a tiny fraction of the caloric content of our gallon of food, implying that we could go for almost 1150 miles per gallon!

Factoring in the efficiency, it takes about 24 kcal to cycle a mile, which yields 290 miles per gallon of food. 290 MPG! And the gas/lard equivalent is about 1300 MPG! But before our victory lap in the velodrome, we should put the bike activity in some context.

We have only counted the marginal energy required to bike. For short trips around town, this is the sensible number. But for a cross-country bike trip that may last days, you would consider the cycling to be your sole energetic activity and should count all your food energy as going in support of that mission (even sleeping and resting are necessary to keep going).

We all have a baseline metabolism to just run our bodies and carry out our daily activities. I’ll take the easy number of 2000 kcal per day. Smaller or less active people will need less, and larger or more active people will use more. Cross-country bikers classify as “more active,” but we’re accounting for the activity explicitly, so we can use the couch-potato baseline.

So depending on the mode of biking and how you want to do your accounting, we got about 290 MPG in town, 160 MPG on the open road. Converting to the more universal and useful measure of energy per unit distance, these numbers map to 5 kWh/100-mi, and 2.8 kWh/100-mi. For comparison, electric cars turn in performances around 30 kWh/100-mi, and a 40 MPG car uses 90 kWh/100-mi (but beware a direct comparison between these last two: if the electricity is derived from fossil fuels, the fossil fuel investment becomes similar for the two: we’ll get to this for food in a bit).

We didn’t take hills into account, but to the extent that ups compensate downs, and you pedal at about the same intensity regardless, the power output is constant and we can use the average flatland speed to determine the rate at which energy is exerted. In the case of a net uphill climb, a daily gain of 1000 m (3300 feet) elevation adds 800 kcal of gravitational potential energy for our 80 kg (180 lb) rider-plus-bike—again using a 25% efficiency. This effectively adds a 33% energetic cost to the 100-mile day. We also neglected the start/stop energy dissipated in braking for the in-town rider, which will reduce the mileage a bit. So far, our bodies have not figured out regenerative braking.

These Boots Were Made for Walking! 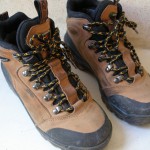 And that’s just what we’ll do now. Walking is an entirely different regime from biking. Air resistance is negligible. Power expended against the air is proportional to the cube of velocity, so a biking speed of 7 m/s (15 m.p.h.) expends 7³~350 times as much power to fight the air as a walking speed of 1 m/s (2.2 m.p.h.).

But that doesn’t mean it comes for free. The energy cost of walking is dominated by the repeated lifting and swinging of legs. The smoothness of the terrain can have a noticeable effect on this energy cost. A table put together at BrianMac indicates that our 70 kg person (156 lb; dropped the bike) walking at 4 km/hr (2.5 m.p.h.) expends 3.8 kcal per minute. The mile will take 24 minutes to traverse at this speed, so 90 kcal will be consumed per mile. Recall that we could bike this distance for a smaller energy investment of 24 kcal. The same site has some figures for cycling, which all compute to about 45 kcal/mile for three different speeds. I find this to be suspicious, given that the drag energy varies by a factor of 5 for the three speeds. Their numbers are also well above what I compute, so I don’t know if the energy for walking is similarly elevated—but what’s a factor of two between friends?

If we are on a multi-day trek covering 25 miles (40 km) per day, and lump the baseline metabolic energy into the mix as simply supporting the journey, we get about 40 MPG on food, and 180 MPG for gas/lard.

We’ve worked through a lot of numbers, under various interpretations. I hesitate to put these numbers into a table for fear that they will be taken literally and treated as definitive numbers. This is meant to be ballpark, people: good to a factor of two. So here’s a table.

Another consideration to bear in mind: in most cases, cycling and walking involve a single “passenger.”  A Prius loaded with four people effectively gets 200 MPG per passenger (18 kWh/100-mi per passenger), so make sure to account for this when making comparisons.

Fly in the Ointment

Our walking or biking economies look pretty decent stacked up against cars—especially if we considered consuming foodstuff as potent as gasoline. This is all well and good until one appreciates that because of the way Americans grow, harvest, distribute, and prepare their food, every one kilocalorie of food eaten has consumed about 10 kcal of fossil fuel energy (dominated by oil). Our 7000 kcal gallon of food therefore took 70,000 kcal of fossil-fuel energy to produce, or a little over two gallons of gasoline. So you would divide the “food economy” values we calculated by 2.2 to get the fuel economy that supported your bike trip or hike. Now walking consumes 18–34 MPG of oil equivalent, and biking comes in at 70–130 MPG.

This should in no way be taken to suggest setting aside the bike or boots for a car that gets better performance. Rather, we should consider ways to make our agriculture or eating habits less energy-intense. By necessity, we once spent less than one kilocalorie of energy on each kilocalorie of food delivered to the plate—otherwise we would have starved ourselves out of existence. So we know that we don’t strictly require a 10:1 ratio of input energy to output energy. Choosing our food sources and food type can make a big difference here.

For instance, if you eat locally grown vegetables that took one kcal of fossil fuel energy for each kcal of food energy, you could claim that the 7000 kcal gallon of food that lets you walk 75 miles only cost a quarter of a gallon of fossil fuels, so your journey effectively gets 300 MPG in fossil fuel terms. Now that’s something to smile about!