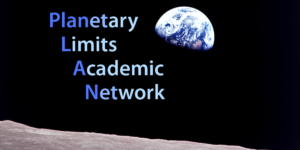 A few years back, I was contacted by Ben McCall—a chemist then at the University of Illinois—about forming a network of academics concerned about the larger challenges facing humanity. The idea was that a number of scattered scholars in various random disciplines might be well aware of limits to growth, energy, and capacity of ecosystems to accommodate human activities, but isolated from each other and within unsympathetic or at least poorly-aligned departments. I identified strongly with this condition and sense of isolation.  For instance, although physicists and astrophysicists have tools relevant to assessing our current predicament, few apply their skills at this level, working instead on deep but narrow questions—as I myself have done for years.  Yet, if we botch civilization, will that type of work survive or have meaning?  Many departments and professional societies therefore lack the community and collaborative opportunities for folks who want to contribute to a higher-level dialog about humanity’s choices.

So Ben pulled together a group of five individuals from a broad range of academic fields to nucleate a network so that we might find kindred spirits and build a diverse academic family united by a shared sense that the trajectory of the human endeavor is not viable, and will come to a bad end if not acknowledged and addressed. By banding together, we would hope to stimulate collaborations and develop ideas that otherwise would be unlikely to emerge. It’s like the setup to many jokes: an astrophysicist, anthropologist, and cognitive scientist walk into a bar. What happens next? What compelling insights and research projects might emerge?

We plodded along for a number of years, constrained by so many other pulls in life. But we have emerged from the long gestation having formed the Planetary Limits Academic Network (PLAN; PLANetwork; planet work; lots of ways to play on the name). Do we have a plan? Sort-of.

Step 1 was to write a perspective piece that presents our take on the modern world and its existential challenges. This recently emerged as a paper entitled: Modernity is Incompatible with Planetary Limits: Developing a PLAN for the Future. I hope you will take some time to read the piece. Do the Math readers will recognize a number of tidbits from ideas presented on the blog.

Step 2 was to create a website, which is at planetarylimits.net. It’s not professionally constructed (you get what you pay for), but should serve to get the network off the ground.

Step 3 is recruitment. We have two roles for the website:

A third role of Collaborator is available for committed members who intend to be active contributors to new “scholarly” products, and will be able to (eventually) search for and contact other Collaborators based on concerns, field of study, and other criteria.

So please visit the site and consider joining as a subscriber (anyone) or applying for membership (active scholars). As we are just starting, early members will have opportunities to define and steer the course of PLAN.

So far, PLAN has attracted a fantastic set of big-picture thinkers from a number of fields.  It is a community I can’t wait to get to know better.  I feel like I have found my people!