I had planned to drop a rather large post today on the thorny topic of collapse. But it’s important enough that I should not rush it and make sure it has all the key pieces I want to convey, and that no sloppiness on my part results in misinterpretations that I later regret.

So what shall we do instead? Hey, I know! Have I mentioned the free textbook I wrote? A few times? Are you getting tired of my plugs? Apologies if so, but what feedback I have received thus far encourages me to believe that it’s a valuable contribution to the world and not intrinsically a flop. People are loving the margin notes, somewhat to my surprise.

However, in order to have a meaningful impact, I would want to do substantially better than the (currently) 7,000 site visits and 3,000 PDF downloads. Sure, many textbook authors might jump for joy at such numbers in less than two months. But millions of people would likely appreciate the message and have enough background to get something out of reading it. From the statistics, it is clear that even most Do the Math visitors have themselves not checked it out yet. I get that it’s a textbook, so: ugh. Who wants to take on that kind of chore? But A) it’s free, B) people report being surprised at how readable it is, and C) the intro provides a graphic (below) that offers a few reading paths that may make it less daunting.

Also, no one has yet submitted a review on Lulu. Even if you have not ordered a print copy, the free PDF material is the same so that a review on Lulu based on the electronic version would be perfectly appropriate. Here is the corresponding to-do list to help encourage a larger readership:

Hopefully, you’ll have the bandwidth to do something on the list while waiting for the big post next Tuesday. Thanks so much for your support! 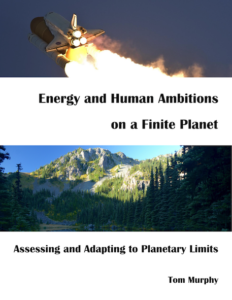 Last week, in the first Do the Math post in years, I kept the post brief, only pointing out the new textbook: Energy and Human Ambitions on a Finite Planet, and giving a brief account of the backstory.

In this post, I take a bit more time to introduce new elements in the book that Do the Math readers have not seen represented in some form in earlier posts. In other words: what new insights or calculations lurk within the book?

The following is organized into three sections. The first takes a brief tour of the book, pointing out large, new blocks that are not already covered by Do the Math in some form. The second highlights the results of new calculations or figures that bring new context to our understanding. Finally, I summarize some of the new big-picture framing that emerges in the book.

Rather than laboriously inserting associated graphics into this post, my intent is that you treat this as a companion to be used side-by-side with the downloadable PDF of the book.  References are to sections, figures, boxes, etc. rather than page numbers, which vary between electronic and print forms. So go ahead and get a version of the PDF up, and let’s jump in…

END_OF_DOCUMENT_TOKEN_TO_BE_REPLACED 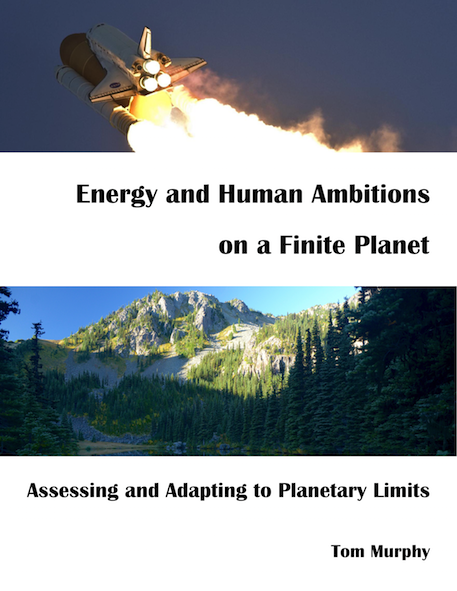 Hello, all, and welcome (me) back! After years of radio silence, I am popping back up and have more to say in the coming months as I re-engage on topics relevant to this blog.

The first thing is to announce the launch of a textbook at eScholarship that is free to access electronically (can download PDF), or is available in paperback form for the cost of printing (royalty-free; at Lulu). Over the years, I received a number of encouragements to write a book collecting the ideas and analysis from Do the Math posts. I appreciated the sentiment, but given the substantial effort required to produce something that was already available for free on this site never rose to a high priority in the competition for limited time.