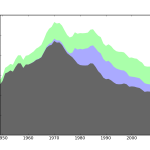 It was by teaching a course on energy in 2004 that I first became aware of the enormous challenges facing our society this century. In preparing for the course, I was initially convinced that I would identify a sensible and obvious path forward involving energy from solar, wind, nuclear, geothermal, tides, waves, ocean currents, etc. Instead, I came out dismayed by the hardships or inadequacies on all fronts. The prospect of a global peak in oil production placed a timescale on the problem that was uncomfortably short. It took several exposures to peak oil for me to grasp the full potential of the phenomenon to transform our civilization, but eventually I was swayed by physical and quantitative arguments that I could not blithely wave off the problem—despite a somewhat unsettling fringe flavor to the story.

Aside from excursions here and there, Do the Math represents—in computer terms—a “core dump” of years of accumulated thoughts and analysis on energy, growth, and the largely unappreciated challenges we face on both short and long terms. During this queued process—with much more to come—I have made references to peak oil, but have refrained from a head-on treatment. As important as peak oil has been in motivating my quantitative exploration of life beyond fossil fuels, it seems overdue that I share my thoughts.
END_OF_DOCUMENT_TOKEN_TO_BE_REPLACED